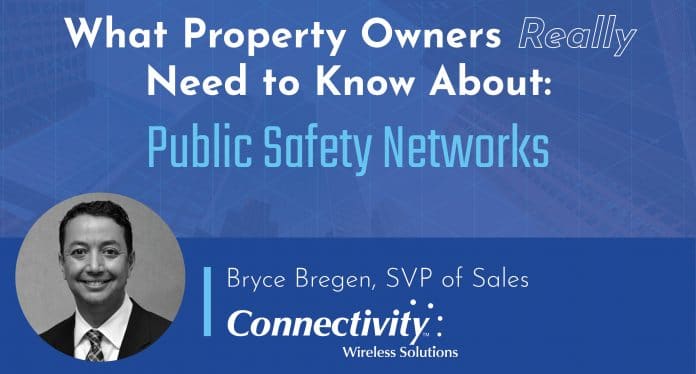 1. What is one thing you really wish property owners understood or knew about Public Safety Networks?

Ensuring public safety communications in properties isn’t necessarily about just making sure you meet a set of codes. Although more and more municipalities are adopting guidelines and mandating standards for two-way radio coverage in buildings, it’s really about emergency preparedness. And the decision to implement a public safety DAS at your building should be based on that fundamental objective.

First-responder coverage is critical during an emergency, but what about everyone else? An effective public safety communications plan should account for infrastructure to support two-way radio (for police, firemen, etc.) as well as cellular (for everyone else).

I think the indecision that most people face when it comes to investing in public safety networks stems from lacking a “comprehensive solution” perspective versus the hat they wear when making other technology decisions that are driven by cost-benefit analysis. When you see it as it is – the direct choice to either enable people to reliably communicate during an emergency or not, I think the right decision becomes clear.

2. What advice do you have for property owners to make the public safety system process as easy as possible?

“DAS in a Box” never works well, but this is especially true for a public safety DAS solution.

A well-designed DAS is like a snowflake – unique. It should be perfectly designed to its environment to provide optimal connectivity. On top of that “imperative”, every AHJ is also like a snowflake. Each AHJ has specific guidance for the approval process that they base on the state guidelines for adoption of the latest Fire Codes. Each fire chief has particular requirements for design and permitting or applications of the mandates.

So trying to do these independently of one another, or trying to make a one-size-fits-all DAS solution meet the requirements of AHJ codes, is like trying to force two separate snowflakes to perfectly match up – it just doesn’t work.

All of this to say, it’s important to do your due diligence in finding a partner that has a positive track record of deploying public safety systems (for several years), a resume of happy long-term customers, and a strong understanding of the local AHJ. These characteristics indicate that they know how to build and maintain systems through the various product evolutions and code updates that have occurred over multiple years.

The company you pick needs to be an expert in the local, state and federal municipalities to make the process move along quickly from design through permitting to installation and on-going operation. They should be able to help guide you through this process with confidence.

3. What do you predict in the next 10 years for Public Safety Networks?

I predict that, eventually, every building in the country is going to have public safety system in some way, shape or form.

The public safety market is quickly growing. For example, the latest fire codes adopted throughout the state of Florida have made the mad dash to improving public safety for almost every building in the state in a short timeline and affects building owners, schools and hotels. These evolutions are now being adopted by other states. It’s not unforeseeable that in the long term this will be adopted by all states.

4. How long have you been in wired/wireless?

I started working for Qwest, a local exchange carrier back in 1995 with the first launch of DSL in the Southwest, then began a competitor startup two years later as Director for the West. We ran a 200-sales-people organization, went public, and then sold. From that point forward, I was drawn to startups and served in senior leadership roles at several. I loved the challenge. Every one of them was a little bit different. They each had a different product set that we were either creating or developing that fed different customer types.

In 2005, the new public safety communications regulations that were put in place as a result of the 9-11 tragedy set in motion my transition into the enterprise side of in-building wireless. One of my first systems was a multi-carrier DAS solution and public safety system for a casino in Maricopa County, Arizona. From there, I went on a crusade for the next decade and a half pushing education to the enterprise space with the understanding, that you’ve got to have it, and in most cases, it’s a requirement.

I came to Connectivity Wireless in 2009 and have continued to champion the same message.

5. Tell us about yourself

I am a former Naval veteran, a public speaker, world traveler and avid golfer (however, not great!). I am also a former west-coaster now living in the great state of Georgia. I’m married to a wonderful Cincinnati native, Barbie, with a growing 7-year-old named Max.