Four Reasons Why Co-Working Spaces Are On The Rise 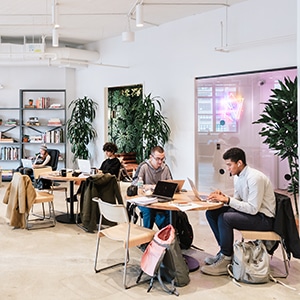 There are some things that won’t change when it comes to the working world, like the fact that people will always need a place to work. While that fact might never change, where people are going to work has, in recent years.
There are a lot more companies trading their traditional offices for the flexibility of what’s known as co-working spaces. These spaces are offices, too, but they differ from the standard work environment in terms of commitment and atmosphere.
From a commitment standpoint, traditionally businesses have had to lock themselves into long-term leases and pay for space they might not even need. In many co-working arrangements, companies are able to rent office space for as long as they need it, and have a say in how much they actually need. If a business decides it wants to relocate in six months, they’re free to step away without the hassle of breaking a lease.
On the atmosphere front, co-working spaces tend to be more open in regards to the layout, there are numerous businesses operating out of them at any given time and often there are amenities like free beverages.
If anyone were to question the growing popularity of the co-working space, they need to look no further than WeWork, one of the pioneers of this industry. The company, which provides individuals and business with flexible working spaces from a single desk to entire headquarters, had a recent fundraising round that valued the company at around $20 billion, according to Forbes. There has been talk of further rounds of funding that could boost WeWork’s value to over $40 Billion.
WeWork’s multi-billion dollar valuation is not the only indicator that the co-working industry has become a phenomenon however. There’s also the fact that more and more companies are joining the fray. According to Statista, there are currently about 4,500 co-working spaces in the United States. In 2010, there were 283, and by 2022, the statistics firm forecasts there will be more than 6,000 co-working spaces across the U.S.
So, why has there been such a dramatic jump in how many of these spaces there are in the U.S.? It really comes down to demand, otherwise, companies like WeWork, BeHive, RocketSpace and Regus would not invest the time and money to open them. That means the bigger question is why is there such a demand from businesses and individuals to operate in a co-working environment?
Well, there are a few reasons.

As previously mentioned, it’s less expensive for businesses to lease space on a membership fee rather than pay rent for a traditional office space. Companies save money working in these spaces because they can share costs with co-tenants like furniture, office equipment, Internet, tech support and energy costs.

Fast growing, startup businesses don’t necessarily want to be locked into a long-term lease situation. If they sign a lease and grow to the point that they need more space, they will have to pay to get out of that commitment to find a bigger office. Or, if they sign a lease anticipating employee growth that does not happen, then the company is stuck paying for office space it does not need. With a co-working space, businesses have freedom to pay membership fees usually month to month and claim space as needed when new hires are made.

One of the benefits of the co-working space is being in the same vicinity of other talented people. For larger businesses, operating in a co-working environment provides an opportunity to learn new trends and practices from start-up companies. On the other hand, start-ups working alongside larger corporations can learn the ins and outs of how to scale a business. Plus there’s always the chance of working together on a project.
For larger companies, renting space in a co-working space also allows them to keep an eye on competition, find potential acquisition targets and attract high quality talent.

While there are companies like WeWork that are specifically a co-working operation, there are commercial real estate owners that see an opportunity to bring in more revenue by using some of their space in the same fashion. Meanwhile, large corporations like IBM have partnered with co-working company Galvanize to launch a New York office space in West SoHo, while Microsoft gave 30 percent of its employees in New York access to WeWork locations in an effort to create more of a “startup culture” in a flexible co-working environment.

If everyone needs a place to go work, a flexible co-working space seems to make as much sense as anywhere else. As more businesses, big and small, opt for the flexibility that a co-working environment can provide, expect more CRE owners to carve out space in their properties to give these businesses a flexible place to land.