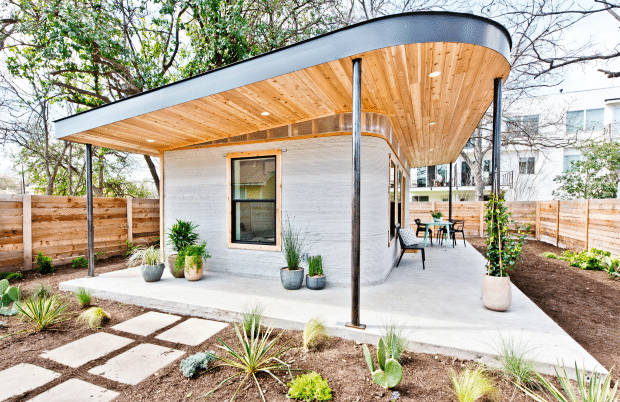 Construction-technology company Icon has predicted it will be able to use a 3-D printer to produce a concrete house within a few days by the end of the year, reports The Wall Street Journal. If successful, the Texas-based startup has the potential to help solve housing shortage—although the company does face regulatory and technical hurdles.
“It’s no longer a science project,” said Jason Ballard, Icon co-founder and chief executive told The Wall Street Journal.
[huge_it_portfolio id=”4″]
The company unveiled its printer this week and said it can create bungalows of up to 2,000 square feet, which is almost as large as the standard home in the United States (2,400 square feet). Three dimensional real estate printing has been attempted in the U.S. and Europe, but the result was mostly simple shelters and the technology was seen more as a promise than a reality.
Austin-based development company Cielo Property Group is buying Icon’s Vulcan II printer and plans to use it to build affordable housing in the city later in the year. A year ago, Icon used its technology to build a 350 square foot home in Austin after the city approved the project. A printed home getting approved already could makes things a little easier for Cielo to work on its projects. However, the home builders are expected to experience skepticism because of how the new houses look, according to The Wall Street Journal. The structures are poured a layer at a time, and the walls look similar to a shar pei dog’s folds.
“We are by nature a conservative industry,” Scott Norman, executive director of the Texas Association of Builders told The Wall Street Journal.
The technology could face additional challenges. There’s the scaling up the production and shipment of expensive and heavy equipment, and building homes in any kind inclement weather, wind, rain, hot or cold days could also make the process difficult.
“You’re not in a sterile lab environment,” Norman said.
Icon will also work with non-profit New Story to print at least 50 homes in Latin America, which are planned to be completed this year.
As for how the process works, a tablet operates the 3-D printer, which only requires a few people to supervise it. According to The Wall Street Journal, the machine squeezes out concrete as if it were cake icing. The printer replaces the workers who frame a home and install sheet rock, insulation, and exterior finishes. The machine also creates less waste than the everyday construction site, where a third of materials wind up in the trash, according to some experts.
Icon said it costs approximately $20,000 and several days to 3-D print a 2,000 square foot house. When land and other construction costs like plumbing are factored in, the 3-D printing figures to reduce the total costs by about 30%, Ballard said. Icon believes it could make a home for $120,000 less than the average Austin home, which costs about $400,000 if builders pass the savings on to customers.
Icon is not the only company looking to 3-D print homes, however. According to The Wall Street Journal, numerous companies are looking to build homes, hospitals and even jails with 3-D printing. Bay Area-based Mighty Buildings has raised $10 million to print homes, but the company has not launched any products yet. Icon has raised $9 million of seed funding, and says this is its initial effort to produce significant revenue.
Although 3-D printing homes seems like an abstract idea, it could address issues the industry’s facing. The combination of less workers and more expensive materials has led to construction costs rising significantly. Meanwhile, about 250,000 fewer homes have been started during the last several years. While a number of startups have put hundreds of millions of dollars towards 3-D printing tech, none have come close to solving the problem.
“People will look back on this as something that was a game changer,” Ben Carson, the Department of Housing and Urban Development secretary, said while touring the Icon’s factory.
Meanwhile, Jonathan Lawless, vice president for product development and affordable housing at Fannie Mae has stated he’s looking to assure the lending industry that 3-D printed homes are less risky than traditional homes, as concrete is sturdier than wood and the homes are more energy efficient.

“We want to make sure that when people think about a 3-D printed home that it’s not like one of those printers you can buy online that’s printing out cheap plastic,” Lawless said.

Facebook
Twitter
Linkedin
Email
Previous articlePrivacy Alert: Facebook looks to sell excess fiber capacity as a wholesaler
Next articleDon't get caught with your antennas down
- Advertisement -