Vodafone, Nokia team up to put 4G on the moon 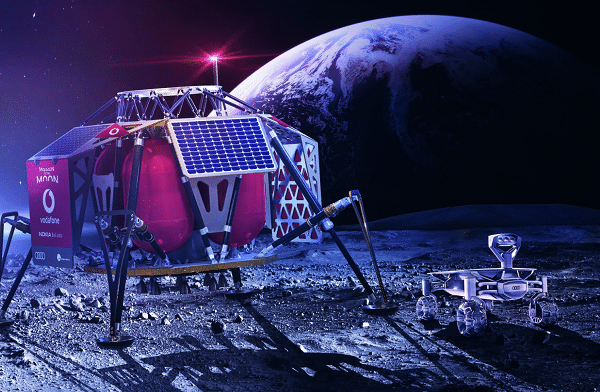 German engineering and science company PTScientists will install the network. The company, along with the operator’s German subsidiary and automaker Audi, has a goal of 2019 to complete the first privately funded moon landing.
According to Vodafone, the 4G network will let Audi vehicles on the moon’s surface transmit data and live HD video streams of footage near NASA’s Apollo 17 lunar roving vehicle, which was abandoned there in 1972.
The operator’s expectation is the network will have the ability to support 4G with an 1800 MHz frequency band and the feed will be broadcast around the world though a deep space link that will beam back to the mission control center in Berlin. Nokia will supply an ultra compact network; weighing less than one milligram, it would be the lightest one ever developed.
“This project involves a radically innovative approach to the development of mobile network infrastructure,” Vodafone Germany chief executive officer Dr. Hannes Ametsreiter said in a statement. “It’s also a great example of an independent, multi-skilled team achieving an objective of immense significance through their courage, pioneering spirit and inventiveness.”
“This is a crucial first step for sustainable exploration of the solar system,” PTScientists CEO Robert Böhme added. “In order for humanity to leave the cradle of Earth, we need to develop infrastructures beyond our home planet. With Mission to the Moon we will establish and test the first elements of a dedicated communications network on the Moon. The great thing about this LTE solution is that it saves so much power, and the less energy we use sending data, the more we have to do science.”
To read more about 4G connections consider reading here
Follow Connected Real Estate Magazine for more industry news