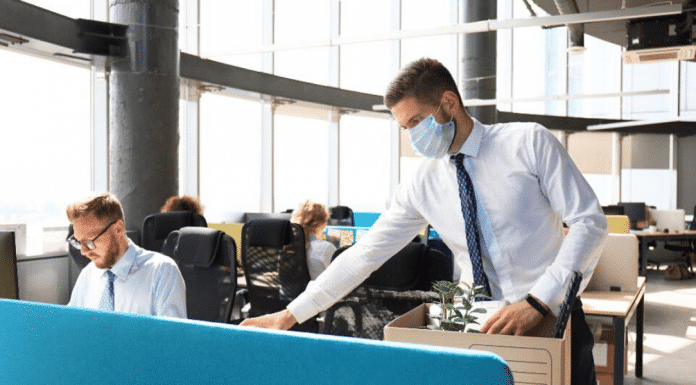 Financial recovery won’t be businesses’ only concern when they begin to reopen after the COVID-19 pandemic. They’ll also be tasked with making customers feel safe coming to their offices and stores again. Magnolia Bakery in New York City for example will ask customers entering its shop to walk through a cleansing chamber, The Wall Street Journal reports. Patrons will be “bathed” in ultraviolet (UV) light for 20 seconds, which is safe for humans, but lethal for viruses and bacteria. Columbia University has tested the far-UVC light on 100 hairless mice for almost a year with no ill effects.

Customers can expect these types of precautions as businesses attempt to curb people’s fear of going into buildings. Prior to the pandemic, people did not give crowding into places like offices, schools, retail shops, restaurants, sports arenas and gyms a second thought. Now, it will be up to building owners and operators to assure people it’s OK to do so again if they want customers to return in pre-COVID numbers.

Here are some of technology solutions and interventions that building owners are putting to work to create a safe and healthy place for patrons to visit and shop.

The Coronavirus can spread through building’s ventilation systems, according to a Center for Disease Control and Prevention (CDC) report. Potentially spreading the virus through the air has building owners reconsidering how they heat and cool their buildings. Companies are also looking into new technologies that can eliminate pathogens the second they leave people’s mouths, according to The Wall Street Journal. The ability to adopt these solutions will depend on how fast they can get emergency use authorization from the Food and Drug Administration (FDA).

Indoor air has become more polluted than outdoor air in a lot of cities during the last few decades, The Great Indoors author Emily Anthes wrote. The drop in inside air quality is partly due to efforts to make buildings more energy efficient. In doing so, some buildings have become, “sealed tombs” that don’t have much outdoor air exchange.

It is possible to for a building to absorb more outdoor air without sacrificing energy efficiency. Engineers didn’t put these measures into practice because they require more design effort and equipment than just recirculating air. Installing filters that can catch small particles, even as small as the Coronavirus, so air ducts are not transmitting re-circulated virus-laden droplets on people as they walk by is another way to improve in-building air quality.

Improved filtration is a possibility for many buildings, but it’s not realistic to bring them up to hospital room or airport standards, according to William Bahnfleth, the head of the Epidemic Task Force at the American Society of Heating, Refrigerating and Air-Conditioning Engineers. Airplanes and hospitals both use the highest-grade HEPA filters and filter their air multiple times per hour.

Ionized particles, which are positively and negatively charged molecules, can inactivate any airborne pathogens they contact. The New York Metropolitan Transportation Authority is currently testing a technology that uses ionized particles—photo-hydro ionization for the city’s subway system, The Wall Street Journal reports. Restaurants, including Chipotle, gyms, sports arenas, federal buildings and gyms have also deployed this technology, according to the vice president of sales for the air division of RGF Environmental Group, which manufactures it.

Companies and stores can’t use high frequency UV light to clean their facilities—it’s what’s used to sterilize hospital rooms and dangerous for humans. However far-UVC, which Magnolia Bakery will use on its customers, is considered safe and can kill tiny microbial pathogens. The Wall Street Journal reports that David Brenner, director of the center for radiological research at Columbia University Irving Medical Center, will announce in a paper that far-UVC light can kill 90 percent of coronaviruses in the air after eight minutes. This rate is high enough to significantly reduce infection risks.

Cocoa Beach, FL-based lighting company Healthe designed the Cleanse Portal Magnolia Bakery plans to use. It’s one of the first portals to use far-UVC light to sanitize people’s skin and clothing when they come into a building. The bakery also plans to use a second version of Healthe’s tech—emitters will be placed in ceiling lamps that will sanitize the air and surfaces.
The COVID-19 pandemic has left businesses like Magnolia Bakery and business owners with a tough decision to make. Should they invest in these types of solutions when a lot of companies are thinking about allowing their employees to continue to telework after the pandemic? On the other hand, making no effort might discourage employees, visitors and shoppers who might have come back from doing so. Count Magnolia Bakery as one of the companies who thinks the investment is worth it.

“We plan to be here a long time,” Bobbie Lloyd, chief baking officer of Magnolia Bakery told The Wall Street Journal. “We’ve been through hurricanes, 9/11 and the 2008 economic crash. Just like I would buy a mixer for $20,000, it’s an investment for the future.”