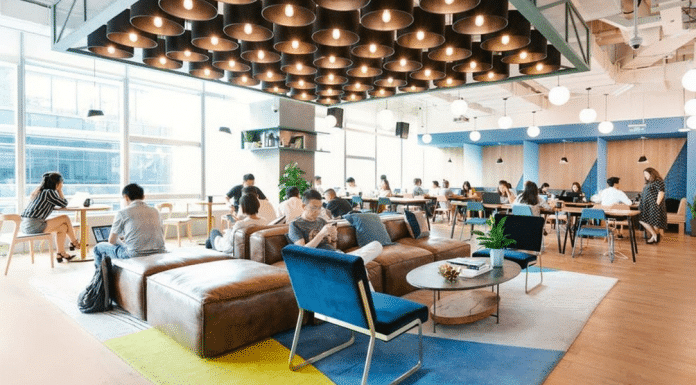 The Real Deal reports that at least four landlords have sued Knotel since the beginning of July because the flexible office space provider allegedly owes $1.6 million in unpaid rent. Knotel has reportedly stopped paying rent at several of its locations as it tries to get its balance sheet in order.

“(Knotel is) always evaluating and adjusting our portfolio to best meet the needs of our customers, through Covid-19 and beyond, and we have reached positive resolutions with many owners,” a company spokesperson said. “We take our landlord relationships very seriously, and will continue to actively engage with them to achieve good outcomes during these challenging times.”
The company’s biggest rent bill is at GFP Real Estate’s 40 Exchange Place in lower Manhattan, according to court records. The property’s landlord alleged that Knotel owes more than $740,000, The Real Deal reports. The company hasn’t paid rent since April, according to GFP’s lawsuit. Meanwhile, investor David Berley’s UNG Realty filed a lawsuit against Knotel, alleging the company owes it close to $197,000 at 580 Eight Avenue in New York’s Garment District. Landlord MJ Orbach ($342,000) and Hanover Estates ($351,000) have also filed lawsuits against Knotel for unpaid rent.

The missed rent payments come as many flexible office space providers have been negatively impacted by COVID-19. Members have been working from home, but landlords still want their rent payments. Knotel is looking to return 20 percent of its portfolio to landlords, according to The Real Deal. Additionally, the company has a goal to raise $100 million in a funding round that would lower its valuation. Knotel is currently valued at $1.6 billion, but lost $233 million in 2019.

WeWork meanwhile has attempted to overcome its pandemic-related setbacks by taking on more traditional corporate clients, The Wall Street Journal reports. Larger companies comprised 65 percent of WeWork’s new customers, according to We Co. Chief Executive Sandeep Mathrani. The second quarter was the first time that companies with more than 500 employees made up more than half of WeWork’s core revenue (excluding its China and India operations).

The new strategy helped WeWork’s sales rebound from a low in the spring. Mathrani said WeWork leased almost as many desks in June as it did in February. Now, co-working companies are hopeful that the combination of economic uncertainty and increased flexible work schedules during the pandemic will encourage big companies to embrace their model.

“If you want to continue to grow faster, the additional demand comes from enterprise businesses,” Mr. Mathrani said during a recent interview.

WeWork’s recent refocus on bigger companies may be out of necessity rather than a business strategy, according to The Wall Street Journal. The flexible office space provider was losing its smaller tenants since the COVID-19 pandemic began. Kruze Consulting, which handles accounting for venture-funded companies, saw half of its customers who use WeWork leave their space between December and June. Meanwhile, another 26 percent of Kruze’s clients reduced their WeWork membership, according to Kruze Vice President Healy Jones.

The difference in vision between WeWork’s current and former CEO’s could also be the reason for the company deciding to target bigger companies. Adam Neumann, WeWork’s prior Chief Executive, viewed the flexible office space provider as a “community” business. The offices were equipped with beer kegs and WeWork offered its annual “summer camp” that hosted concerts and well-known speakers. The philosophy was appealing to small companies and solo freelancers, but was more of a deterrent for larger firms who were concerned rival companies within the shared space might recruit their employees.

Mathrani meanwhile comes from a commercial real estate background and sells prospective WeWork members on the flexibility to decrease or expand their office space on short notice as well as the fact that they don’t have to sign up for any long-term commitments.

The new approach hasn’t completely shielded WeWork from the pandemic’s negative impact, however. A lot of companies are still cutting costs and don’t want to commit to office space, regardless of flexible terms, if there’s any question about whether they can use them. Social distancing mandates are also problematic for WeWork because the company rents space by the square foot and sublets it by the desk. The company will lose revenue if it has to spread desks out across the floor space.

In the meantime, WeWork has seen the number of large company-occupied desks increase 15-fold to 284,000 between 2017 and the first quarter of 2020, according to The Wall Street Journal. Additionally, Mathrani is confident small companies’ demand for flexible office space will increase again when the economy resumes its growth.