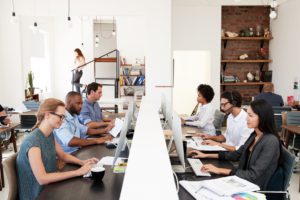 There appears to be no stopping the steady momentum that the co-working office space has built since its early days of being an affordable, flexible option for startup companies. Today, co-working spaces are just as popular among large corporations as they are among businesses with just a handful of employees and a limited budget.
Connected Real Estate Magazine recently examined what has caused such increased enthusiasm for the co-working office—spaces where anyone from a solo freelancer to a corporate enterprise can rent and conduct their business operations from. The reasons varied from lower costs (it’s typically less expensive to pay a membership fee to a co-working operation like WeWork than it is to rent out office space) to new revenue generation opportunities for commercial real estate owners—there are property owners now who have taken some of their space and leased it in the same fashion to businesses like WeWork does.
The technology news outfit GeekWire also recently took a closer look at what has caused a boom in the co-working industry on its Week In Geek podcast. GeekWire interviewed Amy Nelson the founder and CEO of The Riveter, a Seattle-based co-working company and Impact Hub Seattle managing director Sarah Studer. During the interview, Studer pointed out that co-working spaces were not a well-known concept as little as five years ago, and it’s still a relatively new idea to some. Once people get more familiar with the idea however, they become excited about the endless possibilities co-working spaces present.

Both Studer and Nelson recognize why so much money has been invested in the co-working space industry—because they work. Otherwise, WeWork, which is the industry’s biggest entity, would not have been able to raise $1 billion earlier this year. Meanwhile, Nelson said The Riveter is growing faster than WeWork did initially and has raised $5 million already.
According to Studer, one of the reasons more businesses have turned to the co-working office model is because it has helped build camaraderie and enhance collaboration between colleagues. She pointed to the fact that when her company is having a tough time figuring something out, it can quickly pull employees in help solve the issues. “We’ve gotten some of our best ideas from being able to do that,” she told GeekWire.
Along with idea generation, Studer said that co-working spaces help companies grow communities around a building’s physical location. “That also helps the community feel a bit more ownership in the space, too,” Studer told GeekWire. “They know what we’re going through, they’re supporting us. We’re not going to be able to build this by ourselves, we need them to help us do it and help us realize it for everybody.”
As co-working offices become more prominent in the workforce, there are fewer skeptics. For people who are still unsure of its impact, Nelson pointed to data that validates co-working office’s impact on businesses’ success.
“The science proves that you can do more, that you’ll collaborate more, interact more and you’ll get more done (in an open office space),” Nelson said during the interview.
Perhaps the one downside of operating out of a co-working space is businesses can become isolated. Nelson and Studer are making sure this does not happen with their co-working companies by confirming their members know what’s going on outside of their buildings and in the community. The Riveter also teams up with large corporations to let their employees use its resources and attend their events.

Numerous businesses have pivoted their offerings during the COVID-19 pandemic, either to keep their lights on or to help others get through this trying...
Read more
Commercial

Commercial real estate landlords have recently had no choice but to agree to billions of dollars in rent relief to struggling tenants to...
Read more
Commercial

Cohesion survey: Do employees want to return to the office?

The COVID-19 pandemic has made many people rethink how they feel about remote work. Early on, a number of executives considered turning traditional in-office...
Read more
- Advertisment -