Sagging Mobile Sales, 5G Emergence Could Lead to the Rise of ‘Foldable Phones’ 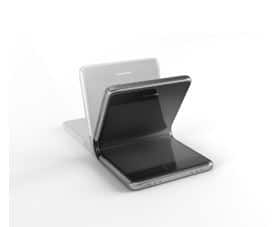 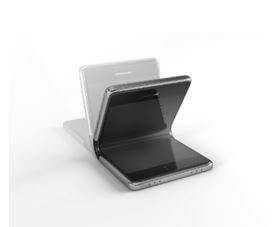 Mobile phone makers are looking to develop smartphones that fold up like books in an effort to increase sales, The Wall Street Journal recently reported.
Apple is among one of the world’s top phone sellers that has sought a patent for a folding phone model, which would be the biggest format change to smartphone that has been a flat, rectangular shape since it hit the market more than a decade ago. Samsung Electronics and Huawei Technologies plan to release handsets with foldable displays—Huawei is eyeing a 2019 release.
Companies view the foldable phone innovation as a way to counteract the slowing sales they believe is the result of customers waiting longer to replace their device. Consumers have not seen the need to upgrade their mobile phones for incremental software improvements like better screens or camera capability, according to The Wall Street Journal.
Phone makers believe the emergence of 5G wireless networks will increase interest in the foldable phone model. The larger display they’ll feature won’t take up much more space in a pocket or purse, and will be desirable as 5G network availability is expected to increase video content consumption, virtual reality and other visually engaging media.
For now however, smartphone developers must find a way to create a device that’s flexible enough to fold in half, but at the same will not sacrifice display quality or durability. Other issues include supply-chain limitations for the necessary materials, more expensive building costs and of course the question if consumers will even want the phones.
“It will take several years to persuade consumers that these foldable phone factors will bring you good benefits, a better experience,” said IHS Markit smartphone analyst Jusy Hong told The Wall Street Journal. “(Regardless) the smartphone market has matured, and we need something new.”
The new look could be the foldable phone’s biggest selling point. Since the iPhone’s debut in 2007, the smartphone look has remained the same. Performance and software have been enhanced during that time and there have been innovations like edge-to-edge screen display, but the overall design has remained stagnant for the most part. The lack of change is a sharp contrast to the initial days of the mobile phone when devices came in all shapes and sizes.
Chinese device maker ZTE Corp. released a phone with a folding display last year, but it sold poorly and was not well received critically. However, phone companies have come up with unique designs to make the foldable display technology work, according to patent filings. Huawei filed a patent application for a smartphone that has a continuous screen on a book-like hinge. Meanwhile, Apple filed for patent applications for a folding device, including one that would collapse into a Z-shape.
Currently, only Samsung’s display making division, LG Display Co., and China’s BOE Technology Co. are capable of building a highly technical foldable display, according IDC senior research manager Anabelle Hsu. BOE is working with Huawei on its foldable device, according to sources familiar with the matter.
Phone makers will need a flexible active-matrix organic light-emitting diode (AMOLED) display for their foldable device to work, according to industry analysts. The technology is currently used on the iPhone X and Samsung’s Galaxy S phones, but is more expensive than the more commonly used LCD. The screen also has to be durable enough to withstand the consistent opening and closing over the phone’s lifetime. There will also be a question of price—high-end smartphones can cost as much as $1,000, but there’s a belief the first generation of foldable devices could cost twice that.
“It seems inevitable that companies will be trying different things until somebody hits the right hot button,” University of Surrey visiting professor Stephen Temple, who’s collected mobile phone designs, told The Wall Street Journal.