Noisy Office? Here’s How to Fix It. 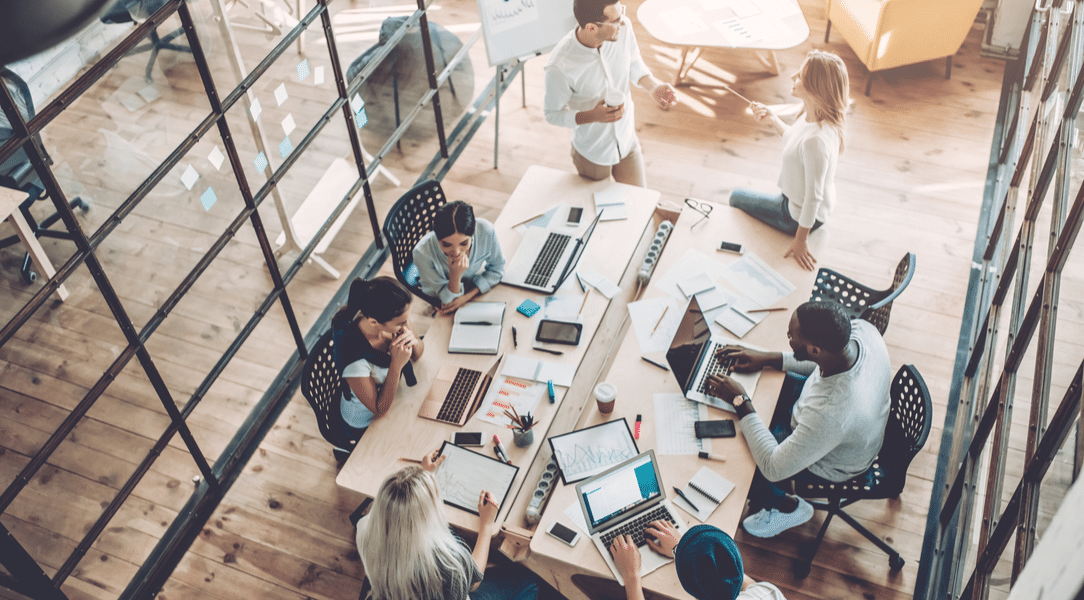 While the debate over whether open floor plans are actually better for the workplace will continue to rage on, one thing is certain – they are noisy. Today, nearly 70% of employees who work in open office plan environments are consistently at risk of performing less effectively due to distractions from noise.
While noise distractions have become an increasing issue in open workspaces, open floor plans are not likely to go anywhere as more corporate occupiers look to reduce square footage costs.
Distractions in the workplace come in many forms. Coworkers collaborating, phone calls, and digital distractions such as mobile devices and social networking sites often lead to lower productivity and less focus on actual work.
According to a recent study by the University of California Irvine, it takes 23 minutes for an employee to refocus on a task after being distracted. Imagine the impact on employee workplace productivity if this occurs several times during an eight-hour work day.
At the same time, corporate occupiers are facing the tightest labor market in approximately 18 years. As a result, these companies are highly focused on talent acquisition and retention while trying to create the most productive workplace environment for their employees.
Poly, formerly known as Plantronics, is a headset provider who created a solution which enables organizations with open office environments to reduce noise and distractions in the workplace by introducing water sounds.
The company’s solution, Habitat, was voted the best technology solution by corporate real estate executives at the Future Offices Spring event earlier this week.
While the sound of a babbling brook resonating through your open office may seem a bit over-the-top,  the headset maker says it came across the solution when it needed to find a way to mask sound and office noise for its own workforce after the company moved from private offices to a completely open office workspace.
“Our own employees at Poly were having a difficult time concentrating and completing work tasks due to increased noise.  It created an acoustic workplace challenge that we had to deal with,” said Darcy Deveo Fike, Director of Business Development at Habitat Landscaping.
Like many companies, Poly originally decided to address the acoustic challenge by introducing white noise, a monotone buzzing or humming- like sound to cancel noise from conversations. However, the solution did not work and led to a significant decrease in attendance.
“Our employees weren’t showing up to work,” said Fike.  “Further studies showed that exposure to monotone sound is associated with increased cortisol levels, stress hormones, and anxiety, all of which drive down workplace productivity.”
Poly’s architects decided to expose the organization’s workers to biophilic design, the concept of using natural elements such as light and plants and sounds like water to eliminate office noise and increase productivity.

Today, many companies such as Amazon, Microsoft, Google, AT&T, and others are using biophilic design to increase creativity, worker productivity, and employee experience.
“Exposure to natural sounds increased cognitive function and sound of water did a better job at masking speech and other kinds of sounds,” said Fike.
The company found that, compared to all the natural sounds, water the best at blocking noise from speech transmission and was able to reduce noise levels in its offices by 75%.
But Poly quickly found that introducing water sounds alone wasn’t enough.  Hearing water sounds without a visual source led to other employee distractions such as fear that something was leaking or pipes were broken, so Poly put digital screens and waterfalls in offices to provide a visual source for the sound – and it worked.
“People came back to the office. They voted by their presence,” said Fike.
Shortly thereafter, the company launched Habitat, an acoustic solution to reduce workplace noise consisting of a library of different water sounds and virtual water content.
Poly’s experience in making headsets enabled the company to design a sensor which uses algorithms to pick up where distracting things are happening and raise the level of sound around them to make the environment less distracting for others.
“The results were astounding. Employees were able to increase productivity, relaxation, creative thinking, conversation, and privacy.  The overall impact was fewer errors, better knowledge retention, and more creativity,” Fike said.