Silicon Valley startup construction company Katerra, Inc. believes its model will shake up the industry, and based on the investments it has received, it appears it isn’t the only one. Both Softbank Group Corp. and electronics manufacturer Foxconn have combined to invest $1 billion into the company whose aim is to change the multi-trillion dollar construction industry, reports The Wall Street Journal. 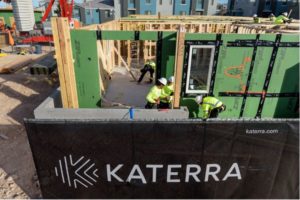 Katerra is in the businesses of completing construction projects faster and cheaper. The company saves time by eliminating numerous middlemen and having architects, cabinetmakers, plumbers, etc. all within one company and building custom wall panels and cabinets via an assembly line, which are then stitched together onsite. Katerra had $850 million in revenue in 2019 and a $4 billion backlog of bookings, according to The Wall Street Journal’s reporting. The company plans to be a major housing builder for Saudi Arabia’s government and be profitable next year.
“We are a manufacturer—that’s how we think about it,” Michael Marks, Katerra’s executive chairman, told The Wall Street Journal.
The building industry currently does not put much investment in research and development compared to other sectors, partly because the industry is so cyclical. This has resulted in limited innovation and productivity and costs remain high. Those high costs limit the amount of affordable apartments and single-family homes in the U.S., according to economists. If Katerra’s model of faster and cheaper home building succeeds, it’s possible there could be an increase in supply and a drop in rent and home prices.
“The cost savings we provide to the developers are going to get more units built,” Marks told The Wall Street Journal.
It remains to be seen if Katerra can deliver on this model however. The company has mainly been constructing buildings that others have designed since its 2015 founding. Plus, a number of those buildings have lacked the ideal geometry that allows its factory-built wall panels and bathrooms to be efficient. Katerra also lost money or broke even on some of its projects, according to Marks. 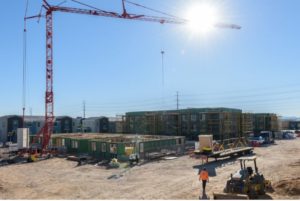 Katerra has also faced opposition from construction unions because of its efforts to decrease the number of workers and replace union members with lower-cost labor. Since building and zoning codes vary by location, the design Katerra uses successfully in Arizona could need to be adjusted for a project elsewhere. There’s also concern the company could be spreading itself too thin, according to Margaret Whelan, founder and chief executive of Whelan Advisory, which advises the home building industry, as it’s also making its own lights and manufacturing its own windows and cabinets.
“What I’ve observed is that those companies that are really narrow in their focus are more successful than companies that are all over the place,” she told The Wall Street Journal.
The concerns have not scared off investors who still see billions of dollars in potential business if Katerra succeeds, however. SoftBank plans to lead another $700 million investment, according to The Wall Street Journal and others familiar with the deal.
Jeff Housenbold, the managing partner at SoftBank’s $98 billion tech-focused Vision Fund, believes Katerra’s potential is much greater than other large construction firms. Housenbold predicted the firm will continue to attract billions of dollars in business it continues to lower construction costs. Meanwhile Dean Henry, chief executive of Bay Area-based Legacy Partners and Katerra client, plans to use the company for at least four projects. He told The Wall Street Journal part of what drew him to Katerra is it guarantees the cost of a project for a year, giving him more certainty.
“They tell us they can build faster,” he said. “That remains to be seen. We believe they will, but they haven’t done it yet.”