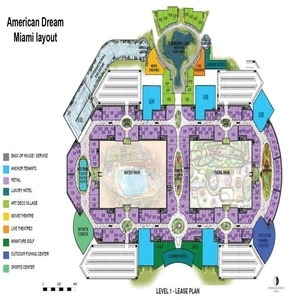 Florida county commissioners have officially approved a plan to built American Dream Miami, which would be the largest mall in the United States, The Wall Street Journal reports. The mall would also be the most expensive one ever built, according to Canadian developer Triple Five Worldwide Group of Cos. The entertainment complex will comprise 6.2 billion square feet and cost approximately $4 billion, according to Triple Five.
The $4 billion price tag would include 2,000 hotel rooms, an indoor ski slop, an ice climbing wall and a water park with a “submarine lake” where guests could enter a plexiglass submarine and descend underwater.
The Miami-Dade County Commission approved the zoning for the complex by an 11-1 vote and is currently trying to secure environmental and water permits for the site.
The project also offers a glimpse into how the bigger mall developers in North American are thinking as they compete for shoppers with e-commerce. Developers understand it’s not enough to fill malls with stores that sell clothes, food and electronics that people can just as easily purchase from home online.
That is why in they are putting restaurants, rides, gyms, services and other types of entertainment in their malls instead. This strategy comes from the fact more consumers to prefer to spend their money on experiences rather than tangible items.
American Dream Miami has bought into this strategy, too. Initially, the plan was to include 3.5 million square feet of retail space and 1.5 million square feet of entertainment space, according to Miguel Diaz de la Portilla, an attorney representing Triple Five. Now the plan has been reversed and more space will be dedicated to entertainment.
Adding modern features and fun amenities has not always worked to convince local governments and financing sources that new malls are necessary however. Other projects that got through the approval stage ended up losing money or they faced delays. The American Dream Meadowlands in New Jersey for example broke ground in 2003, but the first developer ran into financial problems and Triple Five took the project over in 2013. However, it took some time for the company to come up with the additional financing and American Dream Meadowlands will finally open next year.
Meanwhile, there could still be some bumps in the road for American Dream Miami, too. Residents have expressed concerns about traffic and what kind of impact the project could have on the environment. Plus, other mall owners have protested potential government subsidies for the project.
Triple Five believes the resistance comes from a pack of local mall owners who are afraid of the competition American Dream Miami poses.
“They launched a campaign of disinformation to mislead the public and decision makers,” Diaz de la Portilla said.
The other part of the debate around this project is whether another mall in the area is necessary. The project’s supporters point out Miami-Dade County’s population grew 10.2% in July 2017 from April 2010, compared to the national average growth of 5.5%, according to the U.S. Census Bureau.
Zach Winkler, lead of retail for South Florida at JLL noted south Florida isn’t representative of the rest of the United States and believes the area sees strong tourist arrivals from Latin America and is considered a top retail destination in the U.S.
An additional positive factor for American Dream Miami is the belief the mall will create 25,000 jobs once it opens in part by attracting 30 million tourists a year.
However, skeptics believe the project will attract shoppers from other nearby malls rather than tourists who would be more likely to go to Orlando if they want to enjoy thrill rides.
“I don’t see it competing with Disney World,” said Rafael Romero, vice president of Miami-based real-estate services firm Continental Real Estate Companies.
Finances remain a big part of the debate as well as some wonder if American Dream Miami should receive public subsidies. A group of mall owners known as the South Florida Taxpayers Alliance have lobbied county officials to keep the project from being funded or subsidized by taxpayer money. The alliance stated it wants to have a level playing field, “where the new employment opportunities promised by the developers of this massive project do not come at the expense of current jobs,” according to its website.
While Triple Five had secured public subsidies for its Mall of America and American Dream Meadowlands projects, it plans to build American Dream Miami with private dollars, according to Diaz de Portilla.