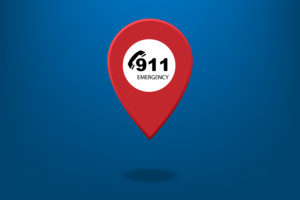 “Today’s proposal is part of the FCC’s ongoing effort to improve its enhanced 911 location accuracy rules, which require wireless providers to automatically transmit to 911 call centers information on the location of wireless 911 callers,” the FCC said in a release.
The rules of the proposal require wireless providers to meet a series of location accuracy benchmarks in accordance with a timetable, including provision of the caller’s “dispatchable location” (such as the street address and apartment number) or vertical location on a phased-in basis beginning in April 2021. In the past, the Commission deferred a decision on a specific vertical location accuracy metric until it received the additional testing data it now has.
The FCC proposed a vertical (or “z-axis”) location accuracy metric of plus or minus three meters of the handset’s location for 80% of wireless 911 calls. The FCC tentatively concluded that such a location accuracy metric would be accurate enough to identify the caller’s floor level in many cases and be technically possible to achieve under the timeframes established in the Commissions enhanced 911 rules.
Commissioner Michael O’Reilly believes three meters strikes the proper balance, writes Inside Towers Washington Bureau Chief Leslie Stimson. Initially, the proposal was five meters, but public safety experts rejected it.
“They argued they need to get to the right floor the first time,” Commissioner Brendan Carr said.
According to O’Reilly, the early test results did not support two meters, so three was a compromise.
Meanwhile, Commissioner Jessica Rosenworcel dissented, arguing three meters was not precise enough. Rosenworcel stated she believed the lead time was too long, according to Inside Towers.
“I think we should be able to do it in less time across the country,” she said. “We should choose standards that, without fail, provide a location.”
To reinforce her point, Rosenworcel shared a story of a New York City woman called 911 from her appointment five years ago. The woman was having a stroke, so her words were slurred and she was unable to tell the operator her location. First responders took eight hours to find her, Rosenworcel said.

New Commissioner Geoffrey Starks agreed with Rosenworcel. “People need solutions that get them help, not close to them, but where they are,” Starks said. “This leaves about a 10-foot margin of error, which can send first responders a floor above or below you.”
According to FCC Chairman Ajit Pai, first responders support the proposal. Pai does believe “a more stringent proposal” is justified, however. The vote for a change went according to party lines, Stimson wrote. The three Republicans on the Commission voted for the change, Democratic Commissioner Rosenworcel dissented and Democratic Starks split his vote, approving in part and differing with another. Starks quested whether Lifeline phones could provide location data and how the agency make carriers secure consumer’s sensitive location data.