FAU stadium gets a DAS upgrade

Florida Atlantic University in Boca Raton is one of the latest stadiums in the U.S. to have its in-stadium wireless system updated.
AT&T finished updating their Distributed Antenna System (DAS) in the FAU stadium, according to a statement on Boca News Now. The statement was released last Thursday, Oct. 19 and the FAU Owls played the North Texas Mean Green on Saturday, Oct. 21 with this updated system in place.
According to FAU’s website, the stadium itself was completed in 2011 and has 29,419 seats available for fans. It’s home to FAU’s football and lacrosse teams, and occasionally hosts soccer matches, like the NCAA’s women’s Soccer College Cup and the U.S. men’s team. 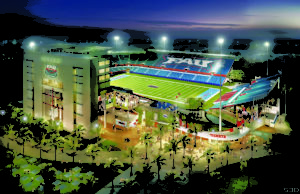 The purpose of this upgrade is to enhance mobile coverage and capacity to fit the demands of more internet users in this stadium. The idea is to improve overall fan experience, and to provide fans with the best internet service possible during the game.
“We added 51 antennas and 25,000 miles of cable to our [DAS] to boost capacity by 200 [percent],” according to officials in a statement.
A growing trend is that more and more individuals are using the internet away from home or away from an office. A report from Statistica, “Percentage of Millennials in the United States connecting to the internet 2012, by type of connection,” shows that most millennials (88 percent), that are 18 to 34 years old, connect wirelessly away from home using a laptop or a mobile device.
AT&T has seen the increase of wireless data traffic by more than 20,000 percent over the past five years, according to its DAS innovation page. Fans are looking to use social media, record or share their experiences on-the-go.
While FAU received updates to its system, Notre Dame Stadium recenltly had a high definition Wi-Fi system installed. Rob Kelly, associate athletics director of ticketing, premium and technology for the school, told Mobile Sports Report that a Wi-Fi network is an important part of its stadium renovations.
“I’m please to say this, Wi-Fi was a priority,” said Kelly to Mobile Sports Report back in August, “It will power what we want to do with our future. Our vision is greater, and the things we want to do won’t work without the network.”
There is a need to ensure that fans have a wireless connection that will allow them to use Instagram, Snapchat, Twitter, and overall share their football experience with others.
By enhancing wireless systems, stadiums may have a better chance of attracting younger viewers. A report from Radio+Television Business Report highlights how sports viewership has aged, but that the live audience “seems to be migrating to digital pretty quickly” and remains relatively young and engaged.
Connected Real Estate Weekly will continue to report on in-stadium wireless updates, and wireless updates for other large-scale venues.

Report: 5G has yet to live up to the hype