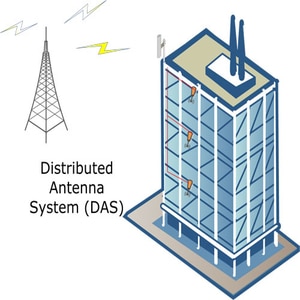 Picking the right solution for the right building

The so-called middleprise—education, retail, business campuses, and residential and commercial buildings between 100,000-square-feet and 500,000-square-feet—is the battleground du jour for in-building wireless systems vendors. The dynamic is relatively clear cut: carriers have limited investment dollars that are reserved for stadia, airports and other enormous venues, which leaves a huge swath of building owners to fend for themselves when it comes to bringing cellular into their properties. 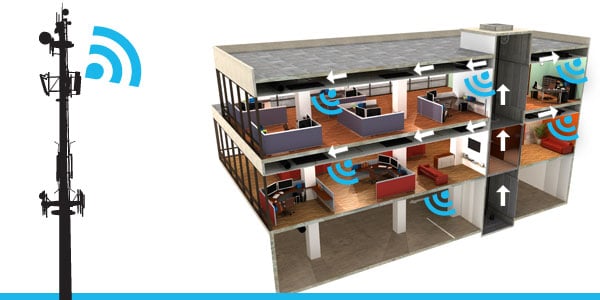 Based on widely-cited industry statistics, a whopping 80% of mobile usage originates from inside buildings. And, with data traffic usage continuing to explode, both from consumers like you and me and also from connected devices like a lighting sensor or a security camera, there’s an in-building imperative. Property owners must ensure tenants have access to quality, reliable cellular or deal with declines in lease renewals, trouble attracting new lessees and the foot the operational costs associated with fielding calls from irritated clients—assuming they can get a signal.
While there are a variety of existing and emerging approaches to providing in-building connectivity, for the purpose of this piece we’ll focus on two varieties of distributed antenna systems (DASs), passive and active.
Passive DASs are also referred to as signal booster systems. At a high-level, a passive DAS takes the outdoor signal from a carrier like Verizon, AT&T, Sprint or T-Mobile US, amplifies the signal then distributes it throughout a building using remote radio units that are similar in form factor to a Wi-Fi access point. The benefit here, as compared to active DAS, is a quicker, simpler installation; the downside is that, to some extent, the indoor signal quality is based on the outdoor signal quality.
Wilson Amplifiers is a major player in the passive DAS space. The company estimates the cost for a multi-carrier solution at between 30- and 70-cents per square foot. Wilson has products that are ideal for buildings up to 100,000-square-feet, so, take an average of the price points mentioned, apply it to that 100,000-square-foot building, and the price estimate would be in the ballpark of $50,000.
Another relatively disruptive player in the passive DAS market is Nextivity. In a project with 2-1-1 San Diego, a community resource hub in Southern California, Nextivity used its Cel-Fi QUATRA solution to eliminate dropped calls in a two-story, 30,000-square-foot, cement building. The company says the system was “up and running within hours following the one-day, third-party installation” resulting in “improved cellular data rates and [employees] no longer experiencing dropped calls.” The install comprises a network unit connected by either power-over-Ethernet or power-over-RF cabling to four coverage units.
“Although we only moved two miles up the road, the coverage was very spotty,” 2-1-1 San Diego VP of Technology Peter Battistel said. “Because we operate a connection center, we have partner agencies co-located with us. We also have 12 meeting rooms that we allow community stakeholders to meet in. We wanted to be able to provide the same level of indoor cellular service for AT&T subscribers who are among the tens of thousands of guests we host each year.”
Now to active DAS. While passive DAS uses a signal from the existing macro network, active DAS differentiates by having a dedicated base transceiver station. These base stations are generally located in a facility’s basement or server room, although base stations can be co-located to serve multiple buildings which saves on power, space and other operational costs. Wilson reckons active DAS installations that support multiple carriers cost in the neighborhood of $5 to $10 per square foot.
Clearly this isn’t a good solution for a building on the smaller end of the middleprise scale, so we can’t realistically compare to the above cost-out for a passive DAS in a 100,000-square-foot building. But, to get an idea of the economics, let’s figure $7.50 per square foot for a 500,000-square-foot building. That comes out to $3.75 million.
But what do you get for that hefty price tag? That dedicated signal source is the main attraction—unlike with a passive DAS, the quality of the macro network doesn’t really matter because you’ve got your own base stations. In terms of in-building coverage, you have the flexibility to hook up remote radio units in basements, parking garages and other places generally associated with poor cellular access.
Another factor to consider, particularly in an active DAS installation led by a building owner, is the time involved. You need to work with the carriers your tenants need, which is often all the big four, to come to terms on availability of base stations and backhaul. Then you’ll need to engage a system integrator to work with carrier teams on the installation, which, given the complexity, can require a good deal of tweaking after it’s designed and activated.
As you learn more about the technologies and companies shaping the in-building wireless market, explore our website to get a comprehensive look at the fundamental role of cellular in maximizing the value of commercial real estate.
If you enjoyed this article please click here for more.

Interview with Rich Berliner by Jennifer Fritzsche, Senior Analyst Wells Fargo Securities Rich, you’ve given me like the perfect transition or set up for my...
Read more
Commercial

Strong Connectivity is key CAREMINDr has released the “Back-to-Work” module of its app that will help employers and healthcare organizations screen employees returning to work...
Read more
- Advertisment -